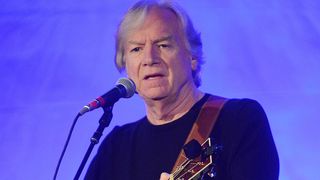 Justin Hayward says he’s “thrilled” that The Moody Blues will enter the Rock And Roll Hall Of Fame next year.

They were last week named in the class of 2018 along with Bon Jovi, The Cars, Dire Straits, Nina Simone and Sister Rosetta Tharpe.

The band have been eligible for the last 25 years – and Hayward admits he thought their chance had gone.

He tells Guitar World: “To be honest, I kind of doubted it because it had been so long. But when it finally happened I was absolutely thrilled.

“For Moody Blues fans, it’s galvanised the music they love. I’m very pleased for them and for us.

“It’s a privilege to be in the same street as Buddy Holly and the Everly Brothers, and then to have Nina Simone inducted posthumously at the same time makes the whole thing complete. She was such a huge influence on me in my late teens and early twenties.”

Hayward will be inducted along with Graeme Edge, Denny Laine, John Lodge, Mike Pinder and Ray Thomas – and he hints that the night could see a reunion with Pinder and Thomas for a live performance.

He says: “I think the spirit is willing. Let’s put it that way.”

Last month, a 50th anniversary edition of the band’s Days Of Future Passed was released and Hayward and The Moody Blues have a run of US tour dates planned for next month, culminating with four nights at the Encore Theatre in Las Vegas.

The Prog Interview: Inside the mind of The Moody Blues frontman Justin Hayward