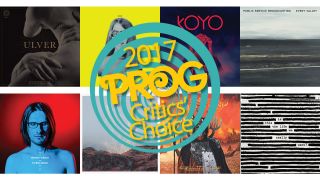 Another year, another nigh on impossible task of whittling down all the great progressively minded releases into some kind of meaningful list. Somehow, the writers of Prog have managed to cull lengthy lists into the required 20, from which we create the overall Top 20.

We said: “Born of live improvisations, the band edit for the studio yet retain the sonic spectacle.” - Ian Fortnam, Prog 80

We said: “As an art rock record at the poppier end of the spectrum, it’s atmospheric and cinematic with hooks aplenty.” - Alex Lynham, Prog 78

We said: “Mogwai approach their variations on a number of themes with conviction.” - Mike Barnes, Prog 79

We said: “While this album is peppered with peculiar sounds, it is anything but inaccessible.” - Johnny Sharp, Prog 79

15) Ulver - The Assassination Of Julius Caesar (House Of Mythology)

We said: “The debt to the sleek and sleazy sheen of 80s electro pop is clear.” - Briony Edwards, Prog 76

We said: “They have an uncanny ability to straddle prog, alternative rock and tech metal.” - Dom Lawson, Prog 80

We said: “War Is Over continues a rich seam of work from the VHB.” - Philip Wilding, Prog 82

We said: “It’s impressive to hear how far Enslaved have travelled from their black metal origins.” - David West, Prog 80

We said: “An immersive experience and quite possibly their finest album to date.” - Joe Banks, Prog 78

We said: “An expansive but consistently excellent double album, and nothing less than a creative rebirth.” - Joe Banks, Prog 80

We said: “There’s a playfulness about this record that, at its best, is nothing short of infectious.” - Alex Lynham, Prog 79

We said: “Hackett’s evident ease at flitting between styles, textures and sound is still a welcome surprise.” - Philip Wilding, Prog 74

We said: “The album reaches peak prog on A Mead Hall In Winter; 15 minutes of sublime twists, turns and textural sleight of hand.” - Dom Lawson, Prog 76

We said: “Like a band who have flipped a coin and watched as it landed on its edge, this is the work of both Mastodons, New and Old.” - Dave Everley, Prog 75

**We said: **“This is a finely crafted masterpiece that grapples fearlessly with the varied psychological aspects of old age.” - Sid Smith, Prog 81

4) Roger Waters - Is This The Life We Really Want? (Columbia)

We said: “If you embrace him as an irascible genius, then this is the album you really want.” - Grant Moon, Prog 77

We said: “The album of their career thus far. A delightfully conceived, emotional yet uplifting masterpiece.” - Jerry Ewing, Prog 77

He said: “Even when I make a big flirty tart of a record, you guys still vote it top of the progs, haha! That’s amazing, thank you so much!”

We said: “What could have been a self-conscious paean to the wide-eyed 80s sounds more like a fervent and meticulous tribute to the very notion of the song itself.” - Dom Lawson, Prog 79