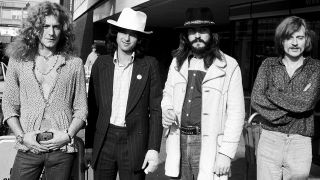 Last year, the US 9th Circuit Court Of Appeals cleared the way for the famous Stairway To Heaven trial to return to court.

Led Zeppelin were originally accused of copying Spirit track Taurus, which was released three years before 1971’s Stairway To Heaven. The case centred on the descending chord sequence at the beginning of the Led Zeppelin song.

At the original 2016 trial, the jury found that Led Zeppelin did not plagiarise Taurus, ruling that it was not “intrinsically similar” to the opening of Stairway To Heaven. Jimmy Page and Robert Plant were cleared of the charge of plagiarism.

Lawyers representing Led Zeppelin subsequently lodged an appeal asking for a larger group of judges to rehear the case – and that request has now been granted, with a panel of 11 judges set to sit in San Francisco in September, according to the Associated Press.

The plaintiff in the case is Michael Skidmore, the trustee for the estate of Spirit songwriter Randy Wolfe – better known as Randy California – who died in 1997.

Meanwhile, a new Led Zeppelin documentary is currently in the works and is being directed by Bernard MacMahon. It'll focus on the band's early days through to 1970, when Led Zeppelin II ousted the Beatles’ Abbey Road from the top of the US charts.