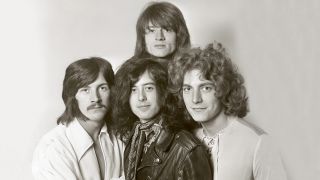 A new Led Zeppelin documentary has been announced to mark the 50th anniversary of the band.

The as-yet-untiled film is now in post-production, with American Epic director Bernard MacMahon helming the project.

It will chart the rise of all four members of the band throughout the 60s, highlight their first meeting in 1968, and will culminate in 1970, when Led Zeppelin II ousted the Beatles’ Abbey Road from the top of the US charts.

It’ll also feature previously unseen film footage and photographs, and will be the first time they've taken part in an official documentary about Led Zeppelin.

Plant says: “Seeing Will Shade, and so many other important early American musicians, brought to life on the big screen in American Epic inspired me to contribute to a very interesting and exciting story.”

Page adds: “When I saw everything Bernard had done both visually and sonically on the remarkable achievement that is American Epic, I knew he would be qualified to tell our story.”

Jones says: “The time was right for us to tell our own story for the first time in our own words, and I think that this film will really bring this story to life.”

The film has been written by MacMahon and Allison McGourty, who will also handle production duties alongside Duke Erikson and Ged Doherty. Dan Gitlin will be the project’s editor, while Nicholas Bergh is on sound supervision.

Meanwhile, Plant has announced a US tour with The Sensational Space Shifters, which will get under way later this year.