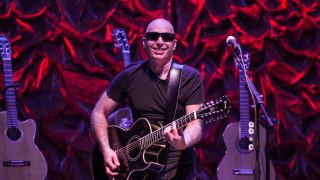 Joe Satriani has announced he’ll tour North America next year to mark the 30th anniversary of his debut solo album.

He’s scheduled the first leg of the Surfing To Shockwave trek to celebrate the 30th anniversary of his debut solo album Not Of This Earth.

He plans to play tracks from throughout his career, including material he hasn’t played live in over 20 years. The guitarist will be joined on stage by drummer Marco Minnemann, bassist Bryan Beller and keyboardist/guitarist Mike Keneally.