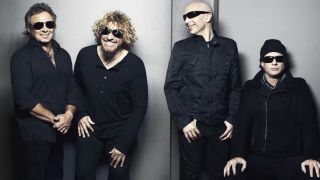 Joe Satriani has confirmed that Chickenfoot are working on a new track and says he’s hopeful of more to come.

He previously admitted he’d given up trying to bring frontman Sammy Hagar, bassist Michael Anthony and drummer Chad Smith back together for their first material since 2011’s Chickenfoot III, saying their unwillingness to write together left him bewildered.

But he says his comments ruffled a few feathers in the camp, which has pushed them to record together again.

Satch tells GuitCast.com: “I think all my complaining and foot-stomping really had an effect, because it was really bothering me and I still, philosophically, felt like there was a really big disconnect there.

“I followed it up with writing some new music, and I sent Sam some stuff – and I was surprised to see him respond so quickly with some creative ideas.

“I can happily tell you now that there is a track that is circulating through the band. It’s got new drums from Chad, it’s got new vocals from Sam, and I think Mike is coming at the end of this week to add bass and vocals.”

The guitarist adds: “I’m working on a few others that I think I can get them to do. So, yeah, I think there’s hope.”

Satriani released his latest solo album Shockwave Supernova in July and heads out on a European tour on September 17.

Satch features in the latest edition of The Blues Magazine.

Under The Influence: Joe Satriani