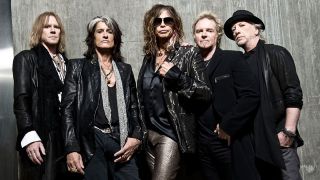 Aerosmith guitarist Joe Perry says that the band are planning to tour next year to celebrate their 50th anniversary.

He said in January this year that Aerosmith would be “gearing up” to mark the milestone towards the end of 2018. Now he reports that a tour with his bandmates Steven Tyler, Tom Hamilton, Joey Kramer and Brad Whitford will happen in 2019.

The band will play the New Orleans Jazz and Heritage Festival later this year and when asked by the Atlantic City Weekly if they had other shows planned, Perry replies: “I think the way things are going we are going to try and and take it easy.

“We may do a couple more one offs – maybe some festivals over the next six or eight months.

“In 2019 we will be closing in on our 50th anniversary, so we are planning some dates and a tour to celebrate that. Right now we are pretty much laying low and finishing up some solo things before we start that.”

Perry launched his solo album Sweetzerland Manifesto in January this year and reveals it was a fun project to undertake with no outside pressure.

He says: “The whole idea was a self evolving thing. It was a great opportunity to use some different musicians in a different environment.

"David Johansen of The New York Dolls was available and he came up and sang on a few songs. That gave the album some direction and it just was a lot of fun."

Perry is currently on tour in support of the album and has two dates remaining. He’ll play at the Hampton Beach Casino later tonight (April 19) and The Music Box in Atlantic City on April 20.

He’ll then return to Europe with Hollywood Vampires bandmates for a handful of shows this summer.