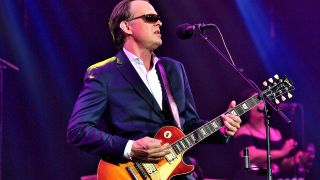 Joe Bonamassa has revealed that he’ll release his new album on October 25.

The show was captured during the blues ace’s set in the Australian city in 2016, with a statement on the release saying: “Live At The Sydney Opera House perfectly captures the incredible talents a man who’s toured nearly every city, country, and major venue over the world… perhaps even twice over.

“With the new album, fans can enjoy Bonamassa’s live talents any time they want, at home or on the way to an upcoming show.”

Bonamassa has marked the news by releasing a video for This Train which kicks off the record. Find it below.

Bonamassa will head back out on the road across  Australia from next month, before further dates in New Zealand and the US.

He’s also begun writing new songs for an future studio album, and plans to return to the studio this winter to begin the recording process.