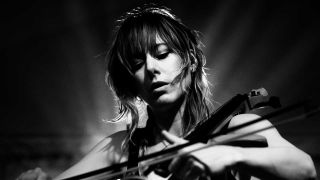 Prog Award-nominated cellist Jo Quail has announced she has launched her own record label, AdderStone Records. her first release will be a reissue of her 2018 album Exsolve, with her previous albums to follow.

"I set up AdderStone Records largely as a vehicle for my own releases, and Exsolve as a special edition, double vinyl will be my first," Quail tells Prog. "The idea of my own label has been in discussion for a while but in the last 12 months my profile has grown and this seems like a great way to draw attention to my previous albums for a new audience. I love the metal festivals and bands I’ve been part of this year but my influences are wide and eclectic. I want to maintain my own identity and I hope drawing my work together under Adderstone Records can aid that.

"I intend to work backwards through my albums to make vinyl re-mastered editions of now-sold-out earlier releases, with Five Incantations coming out in early 2020, including a very special bonus track.

"Whether it’s a CD or vinyl the overall look and feel of the finished package is all part of it for me and I value being able to maintain control of that area of production. The artwork, sleeve notes and packaging are a part of the whole creative process and as such I feel should reflect the individual journey of each album in the various stages of composing, recording and producing the music and I refuse to compromise on this ethos. All of my CD releases have been uniquely packaged with several layers within the artwork itself, there for discovery should you so wish! With the physically larger format offered by vinyl sleeves I can be even more detailed with my packaging, which might be difficult to do under someone else’s label."

In the meantime Quail will support Emma Ruth Rundle on her forthcoming UK tour. They will play:

Quail will also appear at Damnation Festival in Leeds on November 2 and supports Nordic Giants at London's Village Underground on December 14.