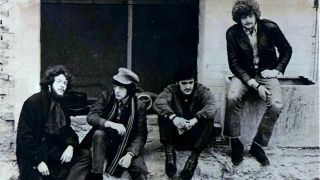 Jethro Tull's 1968 debut album This Was is to have a 50th Anniversary edition release through Rhino on November 9.

“This was how we were playing then – but things change – don’t they?” read the original album's liner notes, referencing the swift progression of the group's sound, from blues to incorporating jazz, folk and classical. The shift proved too much for guitarist Abrahams who would quit after the album and form Blodwyn Pig.

The new 3CD/DVD release features the original album and bonus tracks, including Love Story, A Christmas Song, Sunshine Day and Aeroplane remixed in stereo by Steven Wilson. Wilson has also mixed the tracks in 4.1 DTS and AC3 Dolby. There's live BBC sessions from two 1968 Top Gear sessions, including live versions of Serenade To A Cuckoo, Love Story and My Sunday Feeling, as well as various b-sides, outtakes, radio ads and a previously unreleased mono minx of Someday The Sun Won't Shine For You (Faster Version). The DVD also features Love Story and A Christmas Song in 5.1 surround and an additional 1969 US mix.

This Was is currently available for pre-order through Amazon.