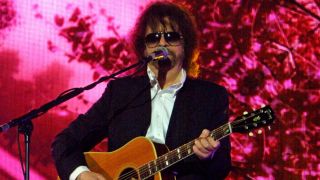 And he says he’s planning more live dates following his appearance at London’s Hyde Park earlier this year – an event he feared could have been a disaster.

Lynne picked up the Outstanding Contribution award at the Classic Rock Roll Of Honour event in LA this week and had previously hinted at bringing ELO back. Now he’s confirmed future plans are in place.

He tells Billboard: “I had so much fun in Hyde Park with 50,000 people. First time I’ve played in 28 years and it was fantastic and I loved every minute, so I’m going to come here and play.

“I’m working on a new album and that’ll be involved in the new times when we play.

Lynne also reveals playing his back catalogue again after decades brought back memories and says some tracks weren’t as straightforward as he thought.

“Some that I thought are very straightforward aren’t at all. I sing them now and realise what they’re about it’s usually about grim stuff like relationships and crap relationships.”