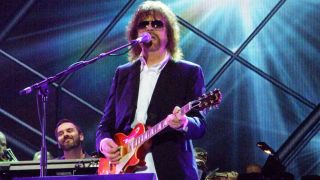 Electric Light Orchestra masterind Jeff Lynne admits he feared the audience for his first show in 28 years would get up and leave before the end.

But Lynne tells the Guardian: “I was really worried before the show; I was thinking, ‘What the hell is it going to be like after all these years?’ I thought the crowd would all disperse and go their own sweet way – but they all loved it.”

The one-off appearance came after a full month of rehearsals. “I started off on my own, practicing in my studio,” he says. “I ran through the whole set twice a day just to get the feel again. You really have to get yourself back into it. Standing up playing guitar is the hardest thing – for the last 20 years I’ve been sitting down in the studio playing, so you have to learn all over again.”

Lynne has already hinted that, after enjoying his return to the stage, ELO could appear again. He reflects: “Once we got that good, that tight, we wanted to play another gig – but my manager said no. We were all fired up, and it would have been perfect time to do it.”

But there’s no chance of the trademark spaceship stage prop returning. “It was broken up in a shipyard somewhere in East Anglia,” he explains. “It was just hanging around, costing millions to store. It was great; I used to jump offstage every night to watch the ship close.

“The noise and spectacle of it and the smoke, these great big whining engines – it was really good. It made our classical music feel like a science fiction movie.”