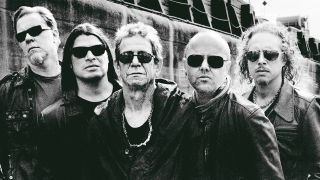 James Hetfield says the late Lou Reed taught Metallica to trust themselves when it came to making latest album Hardwired… To Self-Destruct.

Lars Ulrich recently told how 2011 collaborative title Lulu, which remains controversial, offered the band a new perspective on their own creative process.

Now Hetfield tells Metallica fan club magazine So What!: “Having the honour of Lou Reed in our studio, steering the ship and how he worked. He was a true artist.

“That moment happened, we recorded it, he wasn’t doing it again – ‘I don’t think I could do it again, and if I could it’s just going to be confusing. I’ve done it.’”

The frontman says Reed believed in “trusting your craft” and “trusting the moment” and adds: “You can get very analytical, pathologise everything that happens all the time. but that’s what makes art art.

As a result of learning that lesson, Hetfield says he and Ulrich are prepared to be more experimental in the studio. “I don’t like the word ‘jamming’ – but creating together and seeing what happens? There was not a lot of that in Metallica until Lulu showed up,” he reports.

Asked about the creative balance in the band, after he and Ulrich led the development of Hardwired To Self-Destruct, he replies: “I would say that, between the four of us, there’s an understanding that Lars and I have shared the steering wheel since day one on this. Why deny that? Wy try to chance that? Accept and embrace it, and try new things.

“We’re out for the best songs. We’re not trying to be all-inclusive, where everyone’s got to feel good.”

But he continues: “I wouldn’t read into that too much about the contribution. There are times when someone’s more creative than the other person. It’s always been the best it can be for Metallica.”

Hardwired… To Self-Destruct is the band’s sixth chart-topping release in a row. It achieved the highest first-week sales figures of any rock album in the past three years, and the third-highest debut week figures of all album in the US this year. It hit the number one spot in the US and many other countries around the world – although not in the UK, where pop group Little Mix’s Glory Days forced the band into second position.

Metallica’s Hardwired… To Self-Destruct: vote for your favourite track