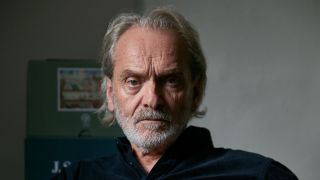 Jack Hues premieres his brand new video for A Long Time with Prog. The track is taken from Hues' forthcoming debut solo album Primitif, which is released through the Dawn Chorus Recording Company label on March 20.

"Whereas the first track from Primitif, Whitstable Beach, is essentially a poem set to music, one of a series I was working on, A Long Time emerged with words and music together and began life as an acoustic guitar ballad," Hues tells Prog. "The lyrics are inspired by my time living in the centre of Canterbury, and as with Whitstable Beach the video was filmed in the Theatre Royal in Margate, a wonderful grade II listed building dating back to the 1700s."

Hues, who won the Outer Limits Award at last year's Progressive Music Awards, formed Wang Chung in 1978, the band scoring with 1983's Points On The Curve album. They released the acclaimed soundtrack to William Friedkin's To Live And Die In LA in 1985. Hues also worked with Tony Banks on his 1995 album Strictly Inc. Hues formed his own jazz fusion band The Quartet in 2003 and  earlier this year released an acclaimed cover of Beck's Nobody's Fault But My Own with Syd Arthur.