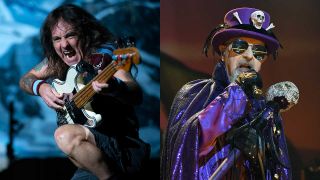 Iron Maiden's Steve Harris has reacted to a suggestion by Judas Priest singer Rob Halford that the two bands tour together.

Halford proposed the pairing during an interview with Consequence Of Sound, in which he said that he'd originally wanted the so-called "Big Four" of UK metal to tour together.

“My dream had always been to have like ‘The Big Four of the UK’, without turning this into a kind of depressing way,” said Halford. “I’d always dreamed of Black Sabbath and Motorhead and Priest and Maiden as ‘The Big Four’ doing something in the UK.”

He continued, referring to the death of Lemmy and Black Sabbath's retirement, saying, "Sadly, two-fourths of that has gone, but the music lives forever. That’s the main thing.

“I think both bands would look to do that. It’s all about the timing of doing such a thing. We’re good friends."

Now Harris has responded, during an episode of Eddie Trunk's Trunk Nation show on Sirius XM. "I suppose the management has gotta get their heads together and [make] something like that [happen]," said the Maiden bassist. "But, yeah, why not? I suppose the fans can push for it to happen. But we'll see."

Priest bassist Ian Hill has added to the mounting noise about the possibility, telling Audio Link Radio, "That would be really interesting if we could get that together before some of us die. It’d be great! You run into these people over the years. We’ve played with quite a few of them, but we’ve got to get together with Iron Maiden."

A month ago Judas Priest were nominated once again for entry into the Rock And Roll Hall Of Fame. "It's just another thrill, again, to be nominated and so quickly because I know sometimes the nominations can get stretched out for quite a long period of time," Halford told Billboard. "So to get another one so quickly is wonderful and another great moment for the Priest and for our fans."