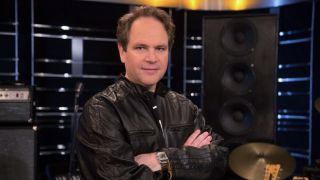 Since the 1980’s, Eddie Trunk has been involved in the world of metal in a variety of ways - radio DJ, television VJ, record company vice president, concert host, book author, and co-host of the popular That Metal Show TV program. Here, he takes time from his busy schedule (including hosting a new talk show, Trunk Nation, on SiriusXM) to ponder which albums led him to his career path.

I’m a young kid at this point - eight or nine years old - and all I ever really knew about music was pop music that I saw on TV. The Partridge Family, cartoon music. One day, I got into the backseat of my parents’ car, and the AM radio was on. The DJ introduced a song by a band called the Raspberries, Go All the Way. The song opens with these really heavy, distorted, power chords, and then jumps into this other riff, that is just this big, grinding, heavy riff. Then it drops into this really beautiful melody. I got goosebumps. It was instantly a whole different world.

I was walking home from school, and my friend said to me, “I’m going to go into this record store and buy a record by this band called Kiss. Their new album is called Rock and Roll Over.” I said, “Maybe I will check out Kiss.” He said, “You should buy the one that came out before it,” which was Destroyer. I went home that day, put the record on my turntable, heard the opening of Detroit Rock City, stared at the album cover, and I was done. It was instant Kiss mania for me for most of my life.

The great thing about live records at the time was if you didn’t have any other records by the band, you could get a good cross section of their material all on one album. I remember getting Live! Bootleg, putting the poster up on my wall, and to this day, I think it is an unbelievably underrated live record. And it is actually a true live record. It just reeks of the ‘70s - it really puts you into the space of when the songs were recorded.

Heaven and Hell was my first Sabbath record. I got it in a way that I got a lot of records - by winning it at the boardwalk at the Jersey Shore. There would be these stands, and you would put a quarter on a number, and if the wheel landed on the number, you got to pick any record. I picked a lot of bands based on what the cover looked like, and for Black Sabbath, I saw the cover of angels smoking cigarettes, and was like, “That will piss off my mom…I’m going to take that!” I heard Neon Knights and I heard Ronnie James Dio, and said, “This is unbelievable.”

I had a friend who was really into Cheap Trick. He was driving at the time and I was not, and he had gotten us tickets to see Cheap Trick, and the other band on the bill was UFO. They were touring on The Wild, the Willing and the Innocent. I got that record, and immediately fell in love with the band. I was just like, “This is amazing music. This is heavy, but it’s melodic. It’s exactly what I love.” And then I saw them - it was a snow storm - they came out and were so loud and so great.

Strangers in the Night definitely has to be in there, as well. I got into UFO because of The Wild, the Willing and the Innocent, but Strangers, to this day, to me, is the greatest live album of all time. And also, probably my favourite album of all time. Strangers to me is just as good as it gets in terms of performance, songs, energy - it’s the ultimate melodic hard rock. I have introduced so many people to that record in the last 15-20 years.

I remember getting that in a record club, where you paid ten cents and got ten albums. I checked that off the list, and I’ll never forget dropping the needle and hearing Runnin’ with the Devil, and being like, “OK, this is a complete game changer.” To this day, the album still holds up remarkably well. So definitely, Van Halen I.

That album came out at a time that I was just starting to work in radio. I started doing a metal show, and Jonny Z [Jon Zazula], I was a customer of his at his record store in the flea market. One day, he came up to my radio station, and said, “I’ve got this band, and I can’t get anybody to play it. Can you play it on the air?” He pulled out of the bag Kill ‘Em All. Just to get him out of there, I played a song from it, and he scribbled on the cover of the album, “Eddie, you were the first. Thank you, Johnny Z.”

He said, “If I can ever get this band to take off, I’m going to hire you to work for my record company.” A couple of years later, Metallica blows up, and he calls me and says, “I’ve got good news and bad news. The good news is I’m starting my record company and I’m going to hire you. The bad news is Metallica is leaving me.” [Laughs] Kill ‘Em All was not only a game changer in terms of not only introducing a new genre of metal, but it was a personal game changer for me, because it indirectly got me into the music business.

Another one that is extremely important to me is the Ace Frehley solo album, Frehley’s Comet. It was the first artist I ever signed to a record deal and was the first album I ever worked on as a record company rep - being in the studio with the guys, helping working in an A&R capacity, and really championing the record. Jonny Z was not a Kiss fan. But when I first started working for Megaforce, I said to him, “I think it’s great we’re putting out all this heavy music. But it would be really cool if we could get a band that could cross over and get some radio play, as well.”

There was a risk in that, because there were so many stories about Ace being a degenerate and a drunk that no one wanted to take a chance on him. He was considered damaged goods. But Jonny said, “Track him down and see what you can do.” We tracked him down, had lunch with him, Jonny ended up signing him, and I ended up working on four albums with him. To this day, Ace and I are close friends.

I was a fan of Buckcherry when the first album came out. The first album did well, the second album flopped, and they were dropped. I became friends with their guitarist, Keith Nelson, and I got an email from Keith, saying he [and singer Josh Todd] was going to reform Buckcherry with a new line-up. They had no record deal, no management, no budget. But they were going to go in the studio and bang out a record.

I told Keith I would help him out however I could, so Keith literally started sending me mp3 files of the songs. He was like, “If you can, just play it. Put it on the radio, just to see if we can get anybody to bite.” The next thing I know, the record gets released in Japan, then they get an indie deal in America, then that leads to a deal with Atlantic, and the next thing you know, I’m getting a gold and platinum record sent to my house.

White Lion came to me when they first formed and only had a Japanese import available called Fight To Survive. I was one of their first radio interviews and became quick friends with the band and loved the album. As a new A&R guy for Megaforce I wanted to sign the band. But I couldn’t get the company to go for it. They thought it wasn’t a fit for the heavier style of music the label was known for.

White Lion ended up signing to Atlantic, which was our distributor. But we remained friends and they never forgot my support. When Pride came out and went Gold I went to see them at the legendary club L’Amour. I was stunned when they called me on stage and presented me with my first gold album award in front of the sold out crowd. It was a great moment and I took great pride hanging it in my office at Megaforce!