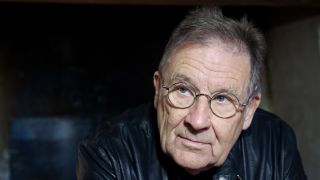 Irmin Schmidt will play three rare live solo dates this winter. The first of these, on November 21 at Huddersfield Contemporary Music Festival, will see him perform the worldwide premiere of two unheard compositions, and the UK premiere of Klavierstück II, from his latest release 5 Klavierstücke. See the other dates below.

Coinciding with the dates is the vinyl release of Villa Wunderbar, which compiles the Can founder’s solo and soundtrack work. The 4-disc vinyl set, previously only available on CD, will be released on November 22 on clear vinyl and limited to 1000 copies worldwide.

It will include two Can remixes plus a collection of soundtrack pieces personally compiled by Schmidt’s long-term collaborator Wim Wenders. The compilation has been updated to include Schmidt’s latest work, Klavierstück V.