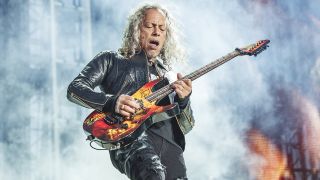 Kirk Hammett is well known for his love of all things horror-related.

The Metallica guitarist has a large collection of memorabilia including posters, toys, artwork and books, which he previously said have all combined to influence his career.

But in a new interview with the Toronto Sun, Kirk admits that even he gets a little apprehensive watching some horror classics on his own because of his “active imagination.”

Asked what scares him, Hammett tells the website: “When I see a situation that I live in from day to day and it’s put into a horror situation, I get a little nervous.

He adds: “I can freak myself out. And, I think that in itself is part of the appeal of all of this: I get myself wound up. And in a weird, sick sort of way it’s exhilarating for me as a jolt of adrenaline.”

Hammett was speaking with the website to promote his It’s Alive! Classic Horror And Sci-Fi Art Exhibition, which will open its doors in Toronto on July 13 at the city’s Royal Ontario Museum.

Hammett has also written an instrumental piece of music especially for the exhibition and will attend a special event at the museum on July 23 and at the Cosmopolitan Music Hall at Cosmo Music in Richmond Hill on July 26.

He’ll be joined by his Metallica bandmate Robert Trujillo, along with Ugly Kid Joe frontman Whitfield Cane and drummer Joey Castillo in their cover group The Wedding Band.