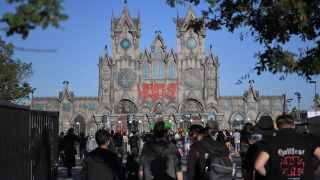 Hellfest organisers have revealed the lineup for next year’s festival.

It’ll take place once again in Clisson, France, and will run on June 21, 22 and 23 – and the lineup is stellar with a huge number of AAA artists set to take the festival by storm next summer.

Not only are Kiss, Tool, Def Leppard, Slayer, Slash ft Myles Kennedy And The Conspirators, ZZ Top, Manowar, Lamb Of God, Whitesnake and Cradle Of Filth going to be there, but they’ll also be joined by Celtic Frost’s Tom G Warrior, who will play music from Hellhammer under the Triumph Of Death banner.

A full lineup poster can be seen below.