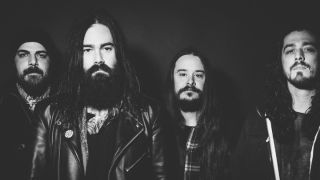 He Is Legend have announced a new album which will be released later this year.

It’s the North Carolina outfit’s first material since 2014’s Heavy Fruit. And to mark the announcement, the band have issued a stream of their new track Sand. Listen to it below.

Singer Schuylar Croom says calls the recording process “taxing” but reveals he didn’t feel pressure while in the studio.

He tell Clrvynt: “I have a hard time knowing what the music sounds like after my vocals are on it. I’m very critical about what it sounds like after I’m done. I’m basically looking for approval from everyone in the band that I didn’t fuck it up.

“This time in the studio was taxing for sure, but I never felt like I was pushing myself to do one thing or another – it was just following what I heard in my head. I don’t think it was ever a matter of me pushing or going too hard.

“I didn’t have the input I maybe needed, so it was like, ‘Okay, whatever you do is what it is.’ There’s a thousand different ways – each song can go in any direction, so I’d often take the first idea and kind of trash it, work on my second idea, and I’ve kind of always done that.

“Whatever vocal idea would pop in my head, I’d work as far away from that as possible.”

Further album details will be revealed in due course. He Is Legend are currently on the road in the US and will head across to Europe in April.

He Is Legend: Heavy Fruit