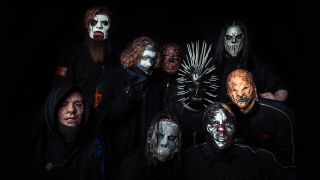 Slipknot fans have been speculating about the identity of the band’s new percussionist since he was revealed earlier this year.

He’s been dubbed Tortilla Man due to his mask and, in a recent interview with The Art And Span Show, guitarist Jim Root gave a few details about the mystery man, saying: “The guy is a world-class pianist, he's a great percussionist, he’s schooled in music.”

Those new clues resulted in Reddit user Les Connelly doing a bit of digging – and he thinks he may finally have unmasked Tortilla Man.

Pfaff also plays in Iowa-based duo The Snacks, with Reddit user Chathead saying that since February of this year, Pfaff has been replaced by another keyboardist.

Has the mystery finally been solved? Possibly, but until someone from the band confirms, it’s still all speculation.

In May this year, Slipknot’s Shawn ‘Clown’ Crahan said that the identity of the new member was “nobody’s fucking business” after he was asked by Kerrang if he was willing to unmask his bandmate.

The band are currently on their Knotfest Roadshow with special guests Volbeat, Gojira and Behemoth in support of their new studio album We Are Not Your Kind, which has landed at no.1 in both the UK and US.