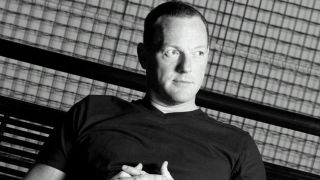 The project came about after Simmons had invited Harrison and Freese to contribute to a solo album. He says: “I asked them to do whatever they thought would best serve the track. I gave them complete creative control.

“That unknown creative variable was critical for me; chance, chaos and the unknown can produce beautiful results if you just let it happen. That’s more difficult than it sounds.”

The concept gave rise to the band name. Simmons explains: “It’s a simple mathematical function – x(x), pronounced ‘ex of ex.’ It’s impossible to know the outcome because the function is undefined. It could be anything.”

He says of the album: “The central theme addresses the psychological effects of long term, self-imposed isolation and detachment. It also speaks to personal circumstances that drive us to make life-changing decisions, both good and bad.”

The band’s sound, he adds, is influenced by Steven Wilson, Peter Gabriel and particularly David Gilmour.

Radio Silence will be available in a limited-edition run of 1000 CDs as well as standard digital format.