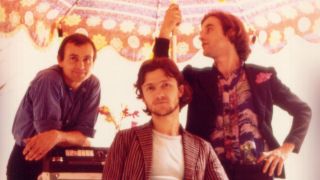 Unseen film of German supergroup Harmonia’s first-ever live show has been released to mark the launch of a career-spanning vinyl box set.

The clip shows preparations for their garden party in Forst, Germany, in 1974 – and it’s thought to be the only such material of Michael Rother, Hans-Joachim Roedelius and Dieter Moebius.

Harmonia: The Complete Works contains their albums Musik Fon Harmonia, Deluxe, Live 74 and Tracks And Traces – the latter recorded with Brian Eno in 1976 but not released until 1997. Also included is an LP of bonus tracks, a replica poster, a pop-up model of their Forst headquarters and a 36-page booklet.

The set is launched on October 30 via Groenland Records. Find out more.