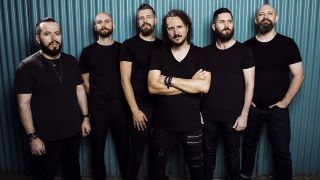 Haken have revealed that their fifth studio album will be released later this year.

It’s titled Vector and it’ll launch on October 26, with the band co-producing the follow-up to 2016’s Affinity with Adam "Nolly" Getgood. The album artwork was once again created by Blacklake.

Haken say in a statement: “On the back of celebrating the 10 year anniversary of our conception, all of us here in the Haken camp are extremely excited to begin this new chapter of our career and share Vector with the world.”

Guitarist Charlie Griffiths adds: “We’ve always had a heavy influence but it was obvious from the riffs that were naturally coming out of us early in the writing process that this would be a more metal album.

“These are some of the most riff driven songs we’ve ever written.”

The album will be available as limited edition 2CD mediabook, which will include instrumental versions of the tracks, gatefold vinyl 2LP/CD, CD and on digital platforms.

To mark the announcement, Haken have opened a competition to give fans the opportunity to have their artwork etched on the fourth side of the vinyl release.

Haken want fans to submit their own ink-blot images – as seen on the Vector cover – with one lucky winner having the honour of seeing their creation featured on the record.

Submissions are now being taken and will close on August 10, while a video about the competition can be seen below.

Haken will head out on tour with Leprous and Bent Knee from October.