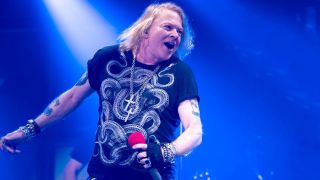 The Not In This Lifetime reunion tour has netted Guns N’ Roses over $5.5m per show – placing them at the top of Pollstar’s global concert chart.

Axl Rose and co made more than Bruce Springsteen, Beyonce, Adele and Coldplay per show – but their average ticket price of $117 was also the highest in the top 20 list.

Trade publication Pollstar assemble their chart from information provided by promoters and venue managers, resulting in an average per-event figure for each band.

Meanwhile, Alter Bridge frontman Myles Kennedy has said he expects to start work with Slash on his fourth solo band album within the next 18 months.

The project has been on hold since the guitarist returned to Guns N’ Roses, following the release of World On Fire in 2014.

Kennedy tells Music Life: “I think I knew by the fall of last year about the GN’R reunion. We actually had communication about a month ago about reconvening in the next year to 18 months. So the door is definitely open.”