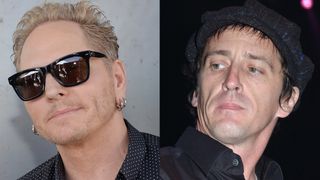 The track will be released in July and was recorded and mixed by JT Longoria at Brotheryn Studios in California.

Sorum says: “Izzy Stradlin and I have collaborated on a new song he wrote called FP Money out in July everywhere. It was great to reconnect again and make some rock’n’roll with this great singer, songwriter guitarist and all around cool dude.

“Music for music’s sake, it was really organic and fun. Hope you take a listen. And turn it up!”

Neither Stradlin or Sorum were recruited to take part in the Guns N’ Roses reunion of Slash, Axl Rose and Duff McKagan. The lineup – which still has a string of dates to come on its Not In This Lifetime tour – is completed by drummer Frank Ferrer, keyboardist Dizzy Reed, guitarist Richard Fortus.

Melissa Reese has also been involved as a second keyboard player.

GNR are the bookies’ favourites to headline Glastonbury next year.