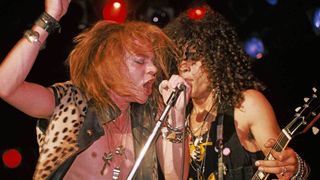 It was 30 years ago today: Axl and Slash onstage at the Troubadour (Image credit: Marc S Canter \/ Getty Images)

No no sooner have the fragrantly-garlanded, welly-booted musical gentry packed up their tipis and wigwams to head back to Hampstead and discuss what a, y’know, really wild time they had at Glastonbury, than thoughts are turning to who will headline the 2017 edition. Leading the list of runners and riders at 8⁄11 on right now are LA’s favourite swear monkeys Guns N’Roses, prompted by the fact that Axl and Slash have kissed, made up and started the tongue-in-cheekily titled “Not In This Lifetime” tour in the States. Why wouldn’t Glasto be the perfect place for Guns to show the UK what we’ve been missing all these years?

It might be perfect timing. Axl looks like he’s using the gym membership card, and Slash is still wearing that topper, but the real good news is that reports say the band are cutting it musically, sounding as mean as they’ve always been. Apparently, this latest incarnation of G N’ R is not, as one journalist sick of megaband reunions called it, “the last roar of the rock dinosaur.”

So far, so good. But let’s face it, we go to this type of gig looking for more than a great band performance. We’re hoping to reconnect with that rock’n’roll spirit we first fell in love with when our jeans had 28-inch waists and T-shirt sleeves were only fit for the bin. It’s a communal thing, where people who fought the rock wars gather together to bond and boogie. It’s the knowing nod, the rock equivalent of the Freemason’s handshake that says “You were there at Wembley Stadium in ’92 mate, just like me.” It’s the feeling that you can peel off your best air guitar riff to Mr. Brownstone and the person next to you won’t make you feel like you’re an utter cock. Sorry, an utter 50-year-old cock!

These are the times when old rock reunions, such a terrible idea on paper, take on some spiritual life of their own, transcending the everyday and taking you to a higher cosmic plane. And if there’s one thing that’s absolutely guaranteed, you won’t be getting any of that at Glastonbury.

Now Glasto has a perfect right to exist. Michael Eavis seems a jolly nice bloke and all that. But you can’t tell me that his regular clientele give a flying fuck about G N’ R in the same way we do. Will they know the Live ?!*@ Like a Suicide EP? No. They won’t even know Chinese Democracy. For people who go to Glasto, Guns is Appetite For Destruction, Axl’s headband, people on stage swearing a lot – and that bleedin’ black logo T-shirt every Tom, Dick and Harry wears. You can buy it in Topshop, can’t you? To these folk Guns is a brand, not a band. And while I will defend anyone’s right to be a casual fan, these are totally not the people to stand alongside when you want your true rock credentials on display.

Playing Glastonbury is exactly the kind of thing rock bands do when they lose touch with their audience. It can happen. And artists have the right to forget their roots if they want to. Lars Ulrich wanted Metallica to play Glasto in 2014. Fine, it’s his band. And for all I know he loved it up there on stage. But I’ve been in the audience at Glastonbury and I know it’s not a place where you can experience that visceral thrill of being part of a fully partisan, passionate hard rock crowd. It’s all about people thinking it’s dangerous once in a while to step out of their comfort zone of Coldplay, Adele and whoever the hell else they usually listen to, and to live a teensy bit wildly. For about 128 minutes at least. And that’s no way to get the ultimate live rock experience.

I’d like to say G N’ R won’t agree to play Glastonbury because their true fans will be priced out of the market having to buy a whole weekend ticket at a princely £228. But I know that won’t be in anyone’s thinking, least of all the band’s. So I have to stick with my original gameplan here, that a gig is half about the band on stage and half about the audience. And I for one would prefer not to be part of the gentrification of rock.

You may disagree. OK. But let me have one last go at making you understand that Glasto and G N’R is not a marriage made in rock’n’roll heaven. And I’ll keep it simple. Guns N’Roses should also not play Glastonbury 2017 because it always pisses down there. And no matter how much anyone tries to convince you otherwise, watching any band in the cold and the rain – even “the (ex) most dangerous band in the world” – is always, always monumentally shite. And remember. You can’t cut the sleeves off a poncho!

The day METALLICA trolled the world