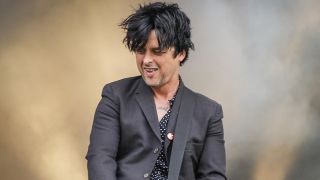 The movie focuses on the mid-life crisis of a husband and father who revisits his punk past by throwing a lavish party. Here, he comes face-to-face with his ex-girlfriend and former bandmates who have all moved on with their life.

And director Lee Kirk reckons Armstrong is a perfect fit for the role.

He tells Variety: “The initial seeds for Geezer were planted a couple of years ago when my son was born within weeks of my 40th birthday.

“Billie Joe Armstrong brings an exciting authenticity to the film. He’s a dad, a musician and an incredible talent.”

Armstrong previously appeared in the Broadway adaption of Green Day’s American Idiot and had a cameo in Paul Rudd and Leslie Mann’s This Is 40 in 2012.

Meanwhile, Green Day have been nominated for induction into next year’s Rock And Roll Hall Of Fame. Five artists chosen by public vote will be put on a ‘fans’ ballot’ to be added to the industry totals. Voting is open via www.rockhall.com.