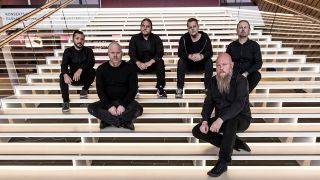 Norwegian prog metallers Green Carnation have announced that they've signed with Season Of Mist and will release their long-awaited new album in the first half of next year.

"We are absolutely delighted to re-join the Season of Mist ranks," the band tell Prog. "Label representatives let us know about their interest three years ago, and although there has been quite a lot of interest from other parties, we were always positive to the idea of working together with Season of Mist again. We are confident that this is the right partner for the band, and we will work hard to fulfil our joint ambitions in a very exciting time ahead for Green Carnation."

Green Carnation returned to active duty after a ten year hiatus to celebrate the 15th anniversary of their classic Light Of Day, Day Of Darkness album. Their new album will be the band's first for 14 years. The new album has been produced by Light Of Day producer Endre Kirkesola.