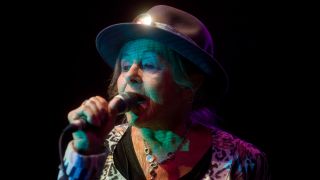 Founding Gong vocalist Gilli Smyth has died at the age of 83.

Smyth died in Australia after a long illness, her son Orlando Allen has confirmed.

He says: “She passed amongst loved ones reading poetry and singing at exactly 12pm Australian time today. She is flying to the infinite through all the bardots as we speak so all your prayers of light, love gratitude and beaming energies are a shining light for her.

“Bless her psychedelic cotton socks, she will be in our and deeply in my heart forever. One of the strongest, most loving forgiving and powerful shakti being mums I have ever known.

“I give thanks for the blessing of her her being her example and shakti mumma presence and happy she is out of pain now and soon to be with, Daevid her dingo Virgin and all her favourite animals.”

Smyth had been married to Gong co-founder Daevid Allen, who died last year.

As well as her work with Gong, Smyth also worked on satellite projects Mother Gong and Planet Gong and made several albums of her own.

She also took part in performance poetry, including under the name Shakti Yoni.

Smyth released solo album Mother in 1978 before forming the Mother Gong band. In 1982, she emigrated to Australia.