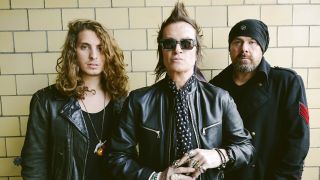 He pulled the plug in January after the trio toured with replacement drummer Joey Castillo – and the move appeared to come as a surprise to young guitarist Andrew Watt, who said: “I put everything I had into this band.”

The frontman and bassist, who was a member of Black Country Communion alongside Bonham before their acrimonious split in 2012, has returned to his solo career and tours Europe this summer with ex-Whitesnake guitarist Doug Aldrich at his side.

Hughes tells MyRockWorld: “When Jason left I had a decision to make – to fold the band completely and walk away with Jason, or continue with Andrew.

“The reason I chose to stay was because tickets were already on sale. I’m the kind of person, if someone has bought a ticket to see me, I’m going to show up.

“When Jason left it really wasn’t a band any more. It was based around my thing. So I thought it would be best for me to go back to my solo work.”

He insists there are no hard feelings between the former members and “everybody is fine, everybody is talking.”

But he adds: “I feel sorry for fans that didn’t get to see California Breed, because it was a really great band.”

Hughes reports that he’s been writing for a solo album and he aims to record it this year for a release in early 2016. He says it’ll be a “rock record with very Glenn Hughes sounding music.”

He’s also working on a country rock project with Billy Ray Cyrus, a side-project he describes as “really interesting.”