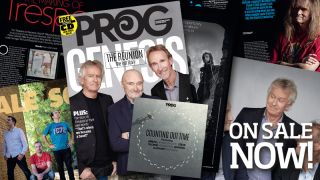 It's Genesis old and new in the new issue of Prog Magazine, which is on sale today.

“I didn’t want anybody to feel like they were being dragged along. I wanted Tony and Phil and myself to be keen to do it – to want to do it. I wanted it to feel like fun.” This is how Mike Rutherford sets about explaining the Genesis reunion in the new issue. That reunion will undoubtedly be one of the biggest stories in music this year. And we've sat down with Tony Banks, Phil Collins and Mike Rutherford to get the story of the reunion. Why they're doing it? Why now? And perhaps more importantly, what are they going to play? Prog brings you the full inside story.

On top of new Genesis, we’ve also got plenty of old Genesis for you too. 12-pages, no less on the making of the band’s 1970s album Trespass, talking to Banks, Rutherford, Peter Gabriel and Anthony Phillips who declare: “That album was when we became a band”.

Before we divulge what's in the rest of the issue, some information on how best to get a hold of your copy of Prog during the current Covid-19 crisis.

* Prog is on sale in the UK in shops that remain open such as supermarkets and newsagents.

* The easiest option for everyone would be to go digital. You can subscribe digitally from just £1.78 an issue. And also from the Apple Store, from Zinio and all manner of digital magazine retailers.

* Single print issues of Prog can be purchased online from MyFavouriteMagazines and also Burning Shed. MFM will be holding more stock than usual.

* Subscriptions. Please note that we are not accepting new orders on print and bundle subscriptions outside of the UK due to Covid-19 logistical issues. We hope to be able to offer this again soon. Please check for details. Single issue magazine orders are not affected by this. UK subscriptions available here.

The postal services in the UK is working, although affected by some inevitable delays.

Chimpan A - Magenta's Robert Reed and Steve Balsamo return with the second Chimpan A album, 13 years after the first

Mick Pointer - the Arena drummer reveals what goes on on his Prog World...

And music from Airbag, Arabs In Aspic, Shaman Elephant, Steve Thorne, Perihelion and more on the free CD.