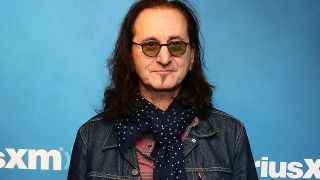 Rush’s Geddy Lee says he’ll return to music when he feels he has something to say, and reports he won’t “live off the fumes” of his past.

The bassist, keyboardist and vocalist has been largely inactive musically since Rush called time on their career following the conclusion of their R40 tour in 2015 – although he did guest on Wintersleep’s 2016 song Territory.

Speaking in October last year with Rolling Stone, Lee reported that while he hadn’t given serious thought to making music, another part of his brain was “always thinking about another music project.”

In a new interview with UCR, when asked what his plans were now that his Big Beautiful Book Of Bass had been published, Lee says: "I don't know what's next for me, and I'm enjoying that.

“My life has been scheduled for the last 42 or so years, and I think I owe it to my family – and I owe it to myself – just to be a human being and allow things to happen, rather than to be so strategic in planning out my moves.

“I did that for so many years that I'm enjoying being bored occasionally. And out of boredom comes productivity, I believe.

“This book was a massive undertaking for me. I have another couple of projects that are different from music projects that I'm working on, but I hope to get back into my home studio and see if I have something to say again.”

Lee adds: “When you don't have a schedule to adhere to, it sometimes invokes a bit of panic. You know, where you're going, ‘Holy shit, what am I going to do now?’

He concludes: “But I won't do music just for the sake of doing music. I have to feel that I have something to say. And that's really important to me. I don't want to just repeat and live off the fumes of my past.”

Rush’s classic 1978 album Hemispheres was reissued in November last year to mark its 40th anniversary. Along with the original album, the new version includes their set from the Pinkpop Festival in June 1979 along with a disc of 5.1 mixes and rare material.