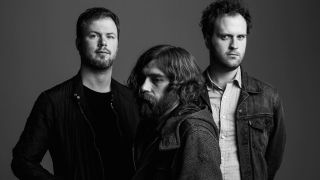 Wintersleep have teamed up with Rush mainman Geddy Lee for their track Territory.

The track is lifted from their upcoming album The Great Detachment – and the idea of getting Lee to record bass on the single came about while the Canadian indie outfit were having difficulty nailing the feel of the track in the studio.

Lead singer Paul Murphy tells Rolling Stone: “It was cool but the song didn’t feel as lively as it should in the end. Someone was like, ‘What would Geddy Lee do?’ Producer Tony Doogan said, ‘Oh, the best bass player in the world? He’d make it incredible. Why don’t we just ask him?‘”

That’s exactly what they did, and Lee says he instantly clicked with the feel of the track.

Lee reports: “I had a listen and loved the song and the vibe of the band. I had a blast laying down a bunch of takes and sent them off to them.

“I’m happy to support a fellow Canadian band and wish them all the best with their new album.”

Murphy adds: “Geddy’s part was perfect because it had this great groove and locked into the vocal melody in the song from time to time, bringing more weight to the melody in important spots.

“It added a certain playful dimension to the equation because it’s so dynamic. Also, Tony was able to strip the song down more in the mix in sections because the bass had such a neat character and fuller sound, which was huge for the song dynamically.”

The Great Detachment will be released on March 4 via Dine Alone Records and is available for pre-order. The band will head out on a Canadian tour next month.