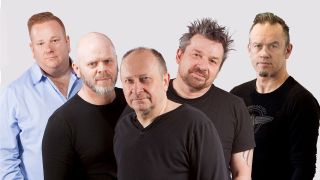 "It was supposed to be a 21st anniversary re-issue in 2019 but, unfortunately, as is occasionally the way of things it has been delayed slightly," smiles singer Stu Nicholson.

"Dean had an immediate impact upon the band coming up with many interesting and varied ideas many of which ended up on the resulting recording which also gave Galahad a more modern slant on so called ‘progressive’ rock, a term which at the time was still very, very uncool not that the band cared that much," recalls Nicholson.

"Following Ghosts ended up being the most diverse, eclectic and accomplished album the band had recorded at that point. Influences were many and varied, everything from the obvious progressive/rock influences plus elements of dance, break beats, ambient and Middle Eastern sounds as well as nods towards more acoustic based pastoral folk influences together with full on classical orchestrations along with the odd occasional hint of jazz."

The new reissue brings together all of the ‘Following Ghosts’ related material and consists of a three CD package containing a completely new re-mix of the original Following Ghosts album by Karl Groom, Alternative Ghosts, which contains new alternative versions of every track from the original album, engineered and mixed by Groom and featuring Mark Spencer playing bass guitar on a Galahad album for the very first time.

"We have also included a re-mastered version of the rather experimental De-Constructing Ghosts album which was originally a separate companion release to the main album under the guise of the Galahad Electric Company back in 1999," adds Nicholson. "This CD contains tracks written and arranged by various other musicians, DJs and re-mixers pieced together from the original Galahad Following Ghosts multi-tracks resulting in completely different songs in most cases!

The new issue includes new artwork, rare photos and notes by various band members and others who were involved at the time. It also includes a copy of the original CD booklet and an original tray insert signed by the current band members (whilst stocks last!). This release will initially also only be available on CD as part of a limited run. The album will also be available to download from the band's updated official Bandcamp site. The re-mixed version of the original album will also be released as a double LP on 180gm gold vinyl in a gatefold sleeve at some point in the near future