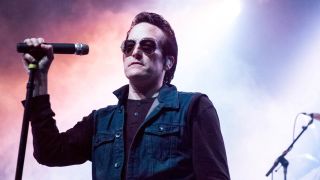 Filter mainman Richard Patrick has apologised to the late Scott Weiland for comments he made about his addictions earlier this year.

Patrick – a recovering drug addict himself – said in April that Weiland’s biggest enablers were his fans, to which the former Stone Temple Pilots and Velvet Revolver singer responded by saying he hadn’t taken heroin in 13 years.

Weiland was found dead on his tour bus in Bloomington, Minnesota, on December 3 where where he was on the road with his band Scott Weiland And The Wildabouts.

The cause of death has yet to be confirmed, but police confirmed they had found drugs in the room where the vocalist’s body was discovered.

Patrick now says he will do everything he can to stay clean himself and ensure Weiland’s death was not in vain.

In a Facebook post, Patrick says: “I’m sorry Scott. You know, I was trying to help. You were mad at me when I went public with my comments on your addiction.

“I figured if I lost a friend in order to help him it was worth the risk. I figured if the shoe were on the other foot, maybe one day you could hit me back somehow if I went out.

“People think it was lame or a publicity stunt but all I wanted was for you to hear me, if not all of us. Bless you Scott. I will learn from your mistakes. I will be sober because of you. Your death won’t be in vain. Whenever I feel the temptation to use I will say to myself, ‘For Scott, not today.’”

Tributes to Weiland poured in following his death and his ex wife Mary Forsberg Weiland said more rock stars would die if fans continued to look upon their problems as art.

Weiland 'was a man who needed help'