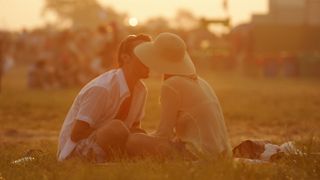 Glastonbury is the UK’s most promiscuous festival according to new research, with Download ranked in third place.

Sex toy retailer Lovehoney carried out a survey of 1000 festival-goers and learned that 34% of music fans ranked Glasto as the best festival to share a romp with a stranger.

Dance event Creamfields got 13%of the vote, with rock and metal mecca Download the choice of 10% of those surveyed.

The research also found that the Red Hot Chili Peppers were the second most likely band to put people in the mood for sex, with Muse coming in at number six, Queen at number seven and Download headliners Iron Maiden in eighth place. The Cure ranked at number 10.

A Lovehoney spokesperson says: “Sex, mud and rock’n’roll – that is reality for the average British festival goer.

“It’s been another brilliant summer of love this year and it is great to see that the miserable weather hasn’t stopped music lovers from getting it on.”

R&B is the genre most likely to get people in the mood for festival sex according to Lovehoney, with rock coming in joint second with dance music. Metal lags behind in fifth place, while rap is a distant 10th in the list.

The survey shows that 43% of those who attended festivals have had sex on the site, with tents, cars and even notoriously grim portable loos being used for such liaisons.

Lovehoney also say that more than a fifth of people have taken a sex toy to a festival, while one in six have had sex with more than one person at a festival and one in five have slept with someone they had never met before previously.

See the full survey results below.

Best type of music to have sex to at a festival

Best place for sex at a festival

The 10 Sexiest Rock Songs Ever