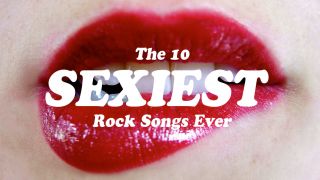 Well, what indeed? Rock’n’roll has always been sexy. Sometimes stupidly, sometimes subtly. But there’s no doubt that music and “lurve-making” have always been perfectly intertwined in the expert hands of rock’s major domos. Here is Classic Rock’s Top Ten Sexiest Rock Songs ever. Nurse, the screens!

You can tell vocalist Paul Rodgers is in a hurry to get naked here, given that he didn’t even have time to add the ‘g’ to the end of Makin’ in the song title. But there’s no doubt that his frankly bursting passion gave him ample inspiration to write a killer piece of rock/blues seduction.

Building from a tender verse where Rodgers wants to wrap the object of his affections “in the heaven”, guitarist Mick Ralphs then gets down to some nitty gritty in a power-chorded chorus before Rodgers finally reveals the person who’s about to get some of his action. “Feel like makin’ love… TO YOU!” Ooh, er…

Halestorm – I Get Off

Lzzy Hale is clearly a woman who wears her sexual heart on her sleeve. She doesn’t mind who knows when she’s in the mood, and this sleazy 2009 rocker explores her fascination with being an object of desire.

Axl Rose seems a tad confused on this six minute 14 second album closer from Appetite For Destruction. First he comes over all misogynistic (“You’ll do whatever I like”), but by the end of the song is a bit of a teddy bear. “All I ever wanted was for you to know that I care.”

The riff is suitably sleazy for a bit of raunchy bedroom action, but it’s the fact that the tune features the sound of a woman having actual sex that really ups the rude-ometer. The gasps and groans were claimed by one Adriana Smith, and engineer Steve Thompson said he recorded “about 30 minutes of sex noises.” What stamina!

Garbage – Sex Is Not The Enemy

Garbage singer Shirley Manson is surely the sexiest poster woman of the grunge generation, so it’s no surprise 2005’s Sex Is Not The Enemy is the sexiest protest song we know.

The lyric was inspired by Janet Jackson’s wardrobe malfunction at the 2004 Superbowl, an incident that shoved the Iraq war off the front pages. Manson felt it odd that the media “was only focusing on Janet’s beautiful tit,” when there were many other far worse things to get het up about. Hence the title.

Divinyls – I Touch Myself

That’s quite a lot to get into three minutes and 43 seconds of music, but Amphlett makes a sterling job of it.

We think he knew, actually. But this proved even too much for the Rolling Stones and they morphed things into a song whose title could easily be referring to heroin for the version that eventually appeared on 1971’s Sticky Fingers album. “I would never write that song now,” says Jagger, and it’s easy to understand why it might offend. But as tunes that celebrate raw passions go, this is right up there.

Heart – All I Want To Do Is Make Love To You

Blimey, that Ann Wilson’s a one, isn’t she? One minute she’s picking up a wet hitchhiker she doesn’t know from Adam, next minute she’s in a hotel room boffing his brains out. Apparently, “he did everything right” and “brought the woman out of me, so many times, easily,” which is jolly good news, of course.

Somewhat trickier, though, is the fact that our sexual athlete stumbles across Ann some years later and finds that she’s just used him to give her the one thing her hubby can’t – a child! Top class AOR that surely guarantees the listener a night of unrelenting pleasure!

If you like your sexiness tongue-in-cheek, then this is the one for you. Zodiac Mindwarp was the leading light of a late ’80s UK biker rock movement, and for roughly five minutes any woman with a passing interest in rock was putty in his greasy hands. “Prime Mover” sees Zodiac bigging himself up as both a “sex fuhrer” and a “love dictator”, but there’s a definite twinkle in his eye here that says we shouldn’t be taking him overly seriously.

The accompanying video brings a whole new meaning to “low budget”, but only adds to the song’s daft-as-a-brush sexy charm.

Aerosmith – Love In An Elevator

Ever had your sassafras kissed? To be honest, we’re not sure whether we have or not, but Steven Tyler has clearly indulged, so we can only assume it’s fun… and sexy. Tyler always said what separated Aerosmith from most rock bands was the swing and the jazz of their rhythms, the sex of it all.

And he was right, dammit! According to the frontman, 1989’s Love In An Elevator was based on a true experience, and the rubber-lipped lothario brings a raunchy sense of sexy fun to proceedings here, “living it up as I’m going down.” Well indeed!

This one’s sexy – if you don’t mind things getting a bit weird. Trent Reznor isn’t all about fluffy cushions and silk sheets when he says “I want to fuck you like an animal”. But the song’s oppressive, hypnotic synth-driven rhythm definitely has something that starts you thinking rude thoughts.

The accompanying uncensored video doesn’t shy away from S&M themes as Reznor hangs about – quite literally – in some mild bondage gear, while full frontal nudity also gets a bit of airtime. Not one for the faint-hearted, but adventurously sexy nonetheless.