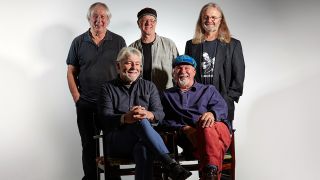 Fairport’s Cropredy Convention has revealed the full lineup of artists for the 2019 event.

This year sees the festival celebrate its 40th anniversary, and it’ll take place at Cropredy, near Banbury, Oxfordshire, UK, on August 8, 9 and 10.

Host band Fairport Convention will kick off proceedings on Thursday 8th with an acoustic performance and return to the main stage on the Saturday for a two-hour headline set.

Thursday will be headlined by The Waterboys, while they’ll be joined on the bill that day by Lil Jim, Tors and Gogol Bordello.

Frank Turner will headline on the Friday, while The 4 of Us, Will Pound & Eddy Jay, Wildwood Kin, Wilson & Wakeman, Seth Lakeman, Richard Thompson and Caravan will also perform.

Before Fairport Convention close out the festivities on the Saturday, the day will see Martin Barre, Richard Digance, Tide Lines, Daphne’s Flight, Zal Cleminson’s /sin'dog and Martin Simpson take to the stage.

Tickets are available now from the Fairport Convention website, while pre-pitched luxury tents are also available for the weekend.