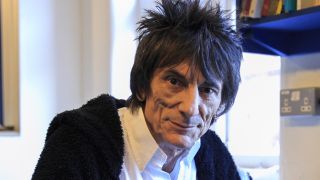 Ron Wood says the highly-anticipated Faces reunion is being held up by Rod Stewart’s management and their financial concerns.

And the Rolling Stones man insists he doesn’t want a gathering of the surviving members to be about money.

Wood said at a Q&A to promote his book How Can It Be? A Rock And Roll Diary: “I think that would be brilliant.”

But he added: “They make everything about money, and we’re trying not to do that. Why can’t the three surviving guys just get together and play for people?”

Drummer Kenney Jones said in March that a reunion had become more important since the death of keyboardist Ian ‘Mac’ McLagan. He insisted: “Rod, Woody and me are going to do the Faces this year.”