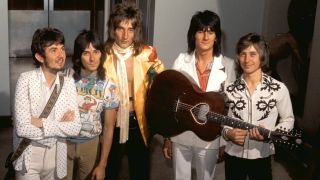 Rod Stewart has paid tribute to Faces bandmate Ian ‘Mac’ McLagan, who died this week after suffering a stroke.

The keyboardist passed away in Texas at the age of 69. He’d been due to launch a US tour with Nick Lowe this week.

Stewart was attending a performing by Mick Hucknall – who took his place during the Faces reunion of 2010 – when he heard the news from guitarist Ronnie Wood.

He tells the NME: “I’m absolutely devastated. Ian embodied the true spirit of the Faces. I was at a charity do, Mick Hucknall was singing I’d Rather Go Blind and Ron texted me to say Ian had passed. It was as if his spirit was in the room. I’ll miss you mate.”

After the Faces split in 1975 McLagan went on to work with the Rolling Stones, Chuck Berry, Bob Dylan, Bruce Springsteen and many others. Stones saxophonist Bobby Keys also died this week. Wood, a colleague of them both, tweeted: “God bless Bobby and Mac.”

Faces drummer Kenney Jones said in his own tribute: “I’m completely devastated by this shocking news. Ian artistry, generosity and warmth of spirit touched countless other musicians and music fans around the world. His loss will be felt by so many.”

Bassist Ronnie Lane died in 1997. The band were inducted into the Rock And Roll Hall Of Fame in 2012, and had planned to reunite with Stewart during the ceremony – but he bowed out due to illness.