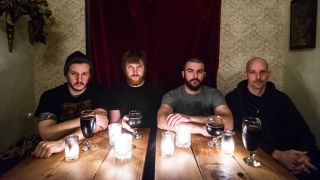 Desperate times call for kick-ass, riff-laden measures, and no band is documenting our age of robber baron capitalism, enforced austerity and class war waged from the citadels of the 1% with quite as much headbang-inducing fervour as Baltimore’s death metal aficionados, Misery Index.

Now they’re about to take up the baton again with their fifth full-length, The Killing Gods, due to be lobbed from the Season Of Mist compound on May 23, and once more it’s a state-of the-art masterwork of ruthlessly efficient riffs, colossal, crunching grooves and strategically deployed, melodic lead breaks. The Killing Gods surges with the weight of death metal’s history behind it, but its razor-sharp production casts it in a modern sheen that will carve its way into metalheads of all generations. Can’t wait? Well, now you don’t have to because we have exclusive stream of the album in its entirety right below. All hail!