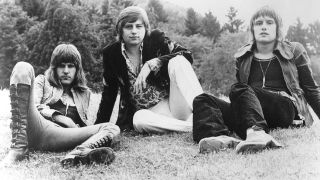 Deadline report that Radar Pictures, the company behind the hit Jumanji films, has managed to secure the rights to transform the 1973 song into a feature film, based around the title and lyrics.

Carl Palmer also confirmed the news on his Twitter feed over the weekend.

Author Daniel H. Wilson has been tapped to create the screenplay, Michael Napoliello and Maria Frisk will produce the film, while Ted Field will be executive producer.

Speaking about the film, which will “explore the world controlled by a pervasive and dictatorial technocracy,” Field tells the website: “The visionary world that ELP created with their recording Karn Evil 9 is much closer to reality today.

“Our team at Radar looks forward to bringing this vision of where things may be headed to the big screen and beyond.”

Wilson adds: “I’m incredibly excited to partner with Ted and Radar to explore Karn Evil 9 – a unique and thrilling world.

“I couldn’t ask for better collaborators and I can’t wait to help add the Karn Evil 9 franchise to the Radar family.”