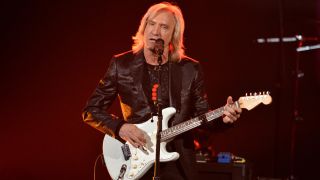 The billionaire owner of New York’s Madison Square Garden says he hopes fans will give his band a chance after he booked himself to open for the Eagles on his home turf.

Jim Dolan, who is friends with Eagles mainman Joe Walsh, has lined up JD & The Straight Shot to support the group on September 18 at the iconic venue.

Dolan also owns the New York Knicks basketball team and the city’s Rangers ice hockey side and says he wants fans to listen to his music, which is known for taking pot-shots at politicians.

He tells the New York Post: “I worry about the other ways that people know me. I worry that they aren’t going to listen to the music. Are they going to look at the music and go, ‘I don’t like how the Knicks are doing this year?’

“You are definitely putting it out there and making yourself vulnerable and susceptible to criticism. And since it’s so personal, you run the risk of being hurt.”

JD & The Straight Shot have opened a number of Eagles shows this year and Dolan has pledged to donate $100,000 to fight ALS if 6000 people join him in playing the kazoo during the track Governor’s Blues at the New York venue. It’s not the first time he’s helped the charity, with Walsh pouring water over the billionaire owner during the recent ice bucket challenge live on US television.

Earlier this year, Walsh was confirmed as a contributor on Ringo Starr’s upcoming album Let Love Lead, while he also guests on the new Foo Fighters’ album Sonic Highways.

Following their US tour, the Eagles head to Australia and New Zealand, wrapping up in Auckland on March 15. It could well be their last outing, with Glenn Frey indicating the end could be around the corner.

He said: “I don’t want to say this is our last tour, but it very well could be.”