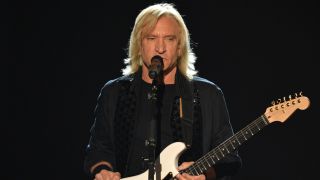 Joe Walsh has recalled the two false starts to his musical career as he flirted with clarinet and oboe in his schooldays.

The Eagles man admits he finally turned to guitar in a bid to “get the girls” – but things could have been very different if he’d stayed in the woodwind section in order to keep his parents happy.

Joe tells Off The Record: “I started out on one of those awful old metal clarinets that the public school would provide for you. The mouthpiece smelled horrible and it squeezed and upset your pets.

“Then I decided that I would play oboe. I wanted to play oboe because the whole orchestra tunes up to the oboe, because the double reed is the purest wave form. Except at some point I discovered that, ‘Joe, you’re not gonna get any girls playing oboe.’

“I decided I would do guitar. My parents hated that I wanted to play guitar and stop oboe. I never got any girls playing guitar either – but I had a darned good time, I tell you.”

Walsh was recently confirmed as a contributor to former Beatle Ringo Starr’s next album, along with Steve Lukather and others. The Eagles return to the UK in June, with Glenn Frey having noted: “I don’t want to say this is our last tour, but it very well could be.”

Joe Walsh on Off The Record