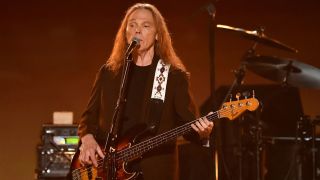 Timothy B Schmit has made his song Red Dirt Road available to stream.

It’s lifted from the Eagles bassist upcoming fifth solo album Leap Of Faith. It’s due out on September 23 and now available to pre-order on his website.

He tells Rolling Stone: “There’s some rich, deep soil there. You have a good chance of growing a plumeria tree by just sticking a branch of a plumeria into the ground. It’s unbelievable.

“That was the motivation. It’s a song about trying to enjoy your life. You can go about your daily business and see it from sunup to sundown – and see it in the best light possible, too – and then just enjoy yourself.”

Schmit also admits that he and his Eagles bandmates are “still processing” the death of Glenn Frey, who died earlier this year aged 67 after a battle with intestinal problems. They’re set to perform at the Kennedy Center Honors show in Washington DC this December, after they were forced to cancel their 2015 appearance because of Frey’s illness.

He continues: “He’s dead. It’s unbelievable. It didn’t happen that long ago. Everybody is still processing it. But part of processing it is carrying on.

“Just now, I stopped thinking about it every day, but I think about this whole thing often.”

The Eagles albums ranked from worst to best