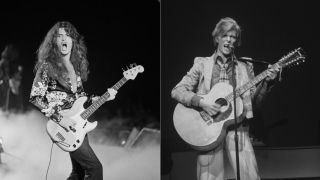 David Bowie and I first met in the summer of 1974 at the Beverly Wilshire Hotel in a room full of guys and girls that included Keith Moon, Ronnie Wood, Harry Nilsson, Iggy Pop and Alice Cooper. I wasn’t going completely off the rails… but I was about to. In walked Angie Bowie and said that her husband had seen me at the California Jam on the TV and wanted to meet me.

I was led upstairs into this dark room, everybody left and he asked me how I’d got into Purple when I was a soul guy. He was fascinated by that. We spoke for three or four hours about music, R&B… everything. The following day I worked at the studio [where Purple were making Stormbringer] and attended one of the several nights David was playing at the Universal Ampitheatre. The day after that he came to the studio and watched me sing the track Hold On. For the rest of that summer we were inseparable.

He asked to stay for a while at my place in Beverly Hills. I was in Germany but he came anyway – by train, alone… which was incredible for one of the world’s biggest stars. I arrived home five days later. At the time David was preparing himself for the role of The Man Who Fell To Earth. For a while nobody knew he was in LA except me and Phil Daoussis, the guy who looked after me back then – not even David’s manager Tony Defries, or the members of his band. I was sworn to secrecy.

I’m so full of respect for David. During the creation of Station To Station we were addled, out of our minds. How could he be so fearless as to stand at the mic and write those lyrics to Golden Years on the spot? That’s when he asked me to sing on the album, but the band [Deep Purple] and the management were against it. I don’t think anyone knows that, but it’s true and it really upset me.

He was always on at me about clothes. David threw a lot of mine away. I was writing my solo album Play Me Out and he might have been trying to mould me. He was going to produce it for me but that didn’t happen. He kept telling me, ‘You’ve got to keep changing – cut your hair, don’t write the same songs’.

By early 1975 we were both into coke – a lot. We were fiendish and paranoid to hell. With the filming of The Man Who Fell To Earth on the horizon, he was seeing things in the sky and drawing them on my windows in crayon. We were tripping… but he felt safe at my gated house, and it was okay. We didn’t really sleep that much.

David was very androgynous and those were very promiscuous times [in his autobiography, Hughes reveals having “loud, aggressive sex” with Angie Bowie]. We never slept together but thought nothing of walking arm in arm – it was completely innocent and kind of cute.

David moved out of my house and into a place on Doheny Drive, and that’s when the real madness began. One night I was there with Nigel Olsson, the drummer from Elton John’s band, and David was so high that he thought the devil was in his swimming pool. He had me in there fully clothed searching for the devil. He was out of his mind – we both were, and I say that out of love. He was wafer-thin. I scarcely remember seeing him sleep, but when he did so it was for days.

He famously called those times in Los Angeles his dark years, so it’s probably no surprise that our friendship didn’t last. After he left LA in 1976 he cut ties with most of acquaintances, including myself. I got messages from him throughout the 1980s and ’90s and sometimes saw him onstage, but he didn’t maintain contact with anybody.

Mutual friends say he was freaked out about his experiences in that era. They were times of surreal excess, but I’m happy to say both of us came out the other side, got sober and continued with our lives and careers.