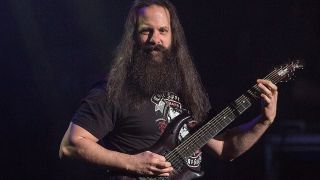 Petrucci also shared a short animated video which can be seen below, which features a snippet of music.

The striking cover art, which the guitarist displayed in nine separate Instagram posts, has been created by Sean Mosher-Smith at Echo Designlab.

It will be released this autumn, with further details to follow.

Speaking previously with Guitar World, Petrucci revealed that playing Damage Control from his 2005 album was a challenge live.

He added: “It’s probably one of the more progressive and weaving songs, and it has so many different sections and parts – plus it’s pretty long, so there’s a lot of memorisation.

“During the night, when that song would come up, it’s like, ‘OK, time to focus!’ The chops have to be really up, and everything needs to be firing on all cylinders. There are so many different themes – it’s almost Dream Theater-esque, the way it departs into the soloing. And, even though the song is an instrumental, there’s sort of an ‘instrumental section.’

“In doing that, it’s going from one part to the next really quickly. There are a lot of angular things happening, so I have to shift techniques really quickly.”

In 2005, there was SUSPENDED ANIMATION. And now, 15 years later, THE WAIT IS NEARLY OVER! #JohnPetrucci #TerminalVelocity #Fall2020 John Petrucci