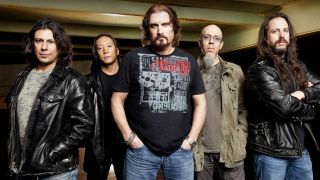 The run of dates to support latest album The Astonishing get underway next week with two nights at London’s Palladium on February 18 and 19, where they’ll play the 34-track album in full.

And with such an ambitious set planned, Petrucci says the reality of the their mammoth tour is starting to sink in.

He tells Music Radar: “We’re going to be in London rehearsing, getting the last-minute touches right on everything. We’ve never played that venue before, so it’s going to be a great way to kick off our world tour.

“It really is a lot of music. I’m kinda panicking at this point. There’s a lot to remember – it’s pretty crazy, even for us.”

Petrucci reports the live set has been in the planning stages for over a year and adds: “This album, and the last two years as a whole, has involved a lot of work, but each step has been really rewarding. It feels like it’s been worth putting into it. And I can’t wait for people to see the show itself.”

Last month, drummer Mike Mangini said the ambitious concept album blew his mind while they were laying down tracks in the studio.

Dream Theater’s tour will see them play across Europe in February and March before they return to North America in April.