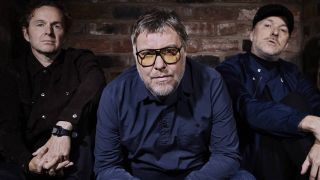 Doves have released a video for their new track Carousels – the band’s first material since their 2009 album Kingdom Of Rust.

The release follows an increase of activity on the band’s social media channels earlier this week, which hinted at an imminent announcement.

A statement on the new single explains: “Jimi Goodwin, Andy Williams and Jez Williams boldly relay their sustained curiosity in the recording process with Carousels, ‘playing’ the studio as an additional instrument.

“In a future-facing statement of intent, they largely forfeit guitars in favour of complex, looped drum patterns, twisted, re-worked or replaced vocals and grizzling synthesised sounds.”

Drummer Andy Williams adds: “It’s a reminiscence of the times that we’d go to places like North Wales on holiday as kids. Places where you had your first experience of sound systems and music being played really loud.”

Following the release of Kingdom Of Rust, Doves went on hiatus, but reunited in 2018 and played the Teenage Cancer Trust show at London’s Royal Albert Hall last year.

In April, Doves confirmed they were back in the studio, saying: “Putting the finishing touches to the last song for album no.5. Sorry we can’t say when it will be released yet!

“As for now we will be working on videos and the cover art etc. We’re all very proud and well amped for album No.5.”

Further details will be announced in due course.